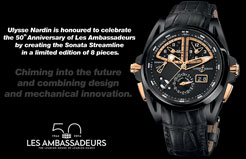 For 50 years, LES AMBASSADEURS have carefully selected and maintained an exceptional range from the most beautiful watchmaking and jewelry brands, thus proudly earning a reputation as “The Leading House of Leading Names”.

Ulysse Nardin is honoured to celebrate the 50th Anniversary of Les Ambassadeurs by creating the Sonata Streamline in a Limited Edition of 8 pieces – chiming into the future and combining design and mechanical innovation. 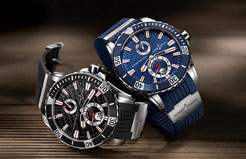 The fully redesigned Marine Diver showcases all the qualities of a genuine diving watch, with its screw-locked crown, rotating bezel and case that is water-resistant to 300 meters. The equally sporty women’s version measures a perfect 40 mm in diameter.

The marine world holds no secrets from Ulysse Nardin. Having contributed to the conquest of the oceans through the development of its legendary marine chronometers, the watchmaker has now anchored its impressive know-how in the sub-aquatic depths. Fully redesigned, the popular Marine Diver is both a highly reliable diving instrument and a fine sports watch that can be worn on every occasion. This stunning piece is also available for women in the form of the Lady Diver, which is less imposing in size but equally appealing to the eye. 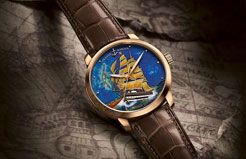 Ulysse Nardin sails into 2014 with the latest addition to its Classico Cloisonné collection: the Amerigo Vespucci. Known for acknowledging magnificent ships of exploration, battle and beauty, Ulysse Nardin celebrates one of Italy’s most esteemed full-rigged frigates in this latest timepiece.

Named after the famous explorer, Amerigo Vespucci, the ship was built in 1930 and launched in 1931. She has voyaged around the globe and is looked upon with pride by those of her mother country, serving today as a training vessel for the Italian Navy. Whether it’s her unmistakable presence or graceful vigor, the Amerigo Vespucci is a force to be admired. 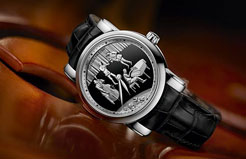 Uniting traditional watch making with the fine art of hand-engraved Jaquemarts is “Jazz,” the new Minute Repeater by Ulysse Nardin. A limited-edition of 18 pieces in platinum, Jazz delivers a vivid design performance of this genre’s unmatched dynamism.

“It’s all music,” once described the legendary Duke Ellington about Jazz. And so it is, spanning more than a rhythmic century in existence with many names along the way, from ragtime to swing, bebop to Dixieland, blues to ska. Brought to the stage by African Americans in the early 1900s, fusing African-based music with European harmony and form elements, Jazz is a vivacious and complex type of music that is not clearly defined, and certainly not constrained. It beats strong across continents and cultures with versatility and change, connecting with its listeners’ for a truly visceral experience. 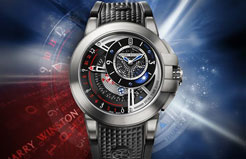 Carrying the lucky number 8, Project Z8 represents the latest model in Harry Winston’s innovative Project Z series. The retrograde dual-time display, that can generally only be adjusted clockwise, can be turned in both directions, making the limited edition Project Z8 truly unique. 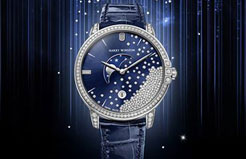 Midnight Moon Phase Diamond Drops 39 mm captures the romance and promise of the evening sky through an enchanting dial design, rich in detail. Featuring 305 diamonds totaling 1.55 carats, this exquisite model is a true testament to House’s expertise in the art of gem-setting. 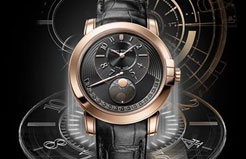 The Harry Winston Midnight Collection derives its classic credentials from a rare balance between the distinct elements that make up a great timepiece. The case evokes the iconic arches that define the façade of Harry Winston’s historic Fifth Avenue Salon – proclaiming its unmistakable heritage.
The Midnight Moon Phase Automatic 42mm draws upon the full force of Harry Winston’s horological expertise. Visible through the exhibition back, the mechanical movement steadily propels the Hours/Minutes functions as well a moon phase and a retrograde pointer-type date display that unfurls majestically across the dial. 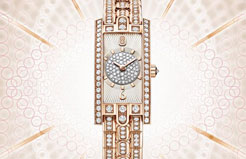 The Avenue C Mini Art Deco, powerful radiance in the most delicate proportions. 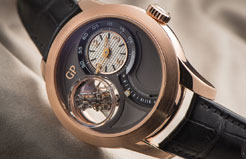 The Tri-Axial Tourbillon represents a major success for Girard-Perregaux, a historic specialist in the mastery of this precision watch mechanism. This is a new step for the Manufacture in its quest for chronometric perfection with a high-speed tourbillon on three separate axes.

A complex mechanism aimed at optimizing chronometric precision, the tourbillon has been a specialty of Girard-Perregaux for over a century and a half. Once again, the Manufacture at La Chaux-de-Fonds demonstrates its mastery of the subject, taking its search for precision even further with the Tri-Axial Tourbillon. 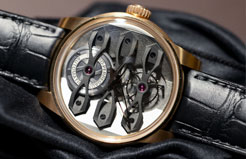 A radical reissue of an old tradition, the Neo-Tourbillon with Three Bridges ushers in the emblematic Girard-Perregaux Tourbillon into a new era of design and mechanical three-dimensionality.

The Tourbillon with Three Bridges, an iconic timepiece created nearly 150 years ago by Girard-Perregaux, has undergone a quantum leap in design. The Manufacture has transformed its legendary Three Bridges model into a new standard in design and watchmaking craftsmanship. The architecture and codes from which it derives its strength and originality have been preserved: however the changes made are captured in the design of the Bridges, the shape of the crystal, and in the heart of the completely redesigned caliber. Crafted with an avant-garde spirit that breaks away from the norm, the Neo-Tourbillon with Three Bridges showcases the Manufacture’s potential for innovation and its ability to honor history while embracing the future. 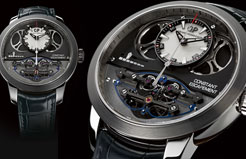 Girard-Perregaux’s Constant Escapement L.M. debuted in 2013, marking one of the brand’s most exciting innovations in its history. As the culmination of several years of research and development, it was the very first constant force escapement to be successfully placed in a wristwatch. The feat is an advanced and sophisticated solution to a quest that has perplexed clockmakers and watchmakers since the beginning of time, constant force – as such it is a victory over decreasing power in traditional mechanical watches to achieve greater precision and regularity. 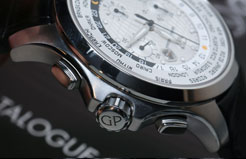 Ever since the company was founded in 1791, Girard-Perregaux watch collections have contributed to the art of stylish traveling. The new Traveller WW.TC watch in pink gold continues this long tradition; the perfect accompaniment for those accustomed to long journeys, this model is now available in a seductive pink gold version.

The history of Girard-Perregaux is intertwined with the successive stages in the development of world traveling and globalization. The new Traveller WW.TC Pink Gold watch is a tribute to this inspiring past. The timepieces invented since its creation provide ample illustration of this involvement, as do the countless journeys of its founders and their successors, always willing to expand their overseas presence to favor the Brand’s development. Around 1830 Jean-François Bautte was already making pocket watches that showed the time in two different places at once. By 1860 François Perregaux had become the first Swiss watchmaker to settle in Japan on a long-term basis so as to develop his business interests there.